The Day I Tried to Give Away 500 Free Copies of My Book….and failed…well maybe not

Posted on January 18, 2016 by coachbillmoore 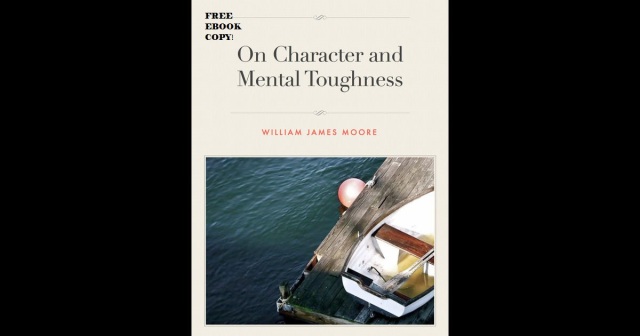 The idea had been there for quite some time. Give away free copies of my book, “On Character and Mental Toughness.“ But how would I go about that? I couldn’t possibly afford to give away many soft cover copies. But then a means came to me as I was searching online for book titles. There are pdf copies of books floating around there. A part of this is terrible of course because such copies deny authors of their royalties. But another aspect of this was powerful and overwhelming. In one click I could send a link to a copy of my book that sits safely stowed on a webpage online. Tap that link and a copy shows up on the recipients smartphone, tablet or laptop. This copy is as easy to read as a book on a Kindle or Nook.

Why would I do this?

The next question was when to do this.  I’m a History teacher by trade and I have always been fascinated with Martin Luther King’s speeches. Particularly the part  pf the “I Have a Dream” speech wherein he mentions judging people by the “content of their character.” Since the book is obviously on that topic, I thought the MLK holiday weekend would be an appropriate time to encourage people to think about their character and that of their communities and organizations.

The final question was how to do this. I have emailed copies to people before.  I sent a copy to a friend from the Philippines who lacked the means to buy it online.  I sent copies to college lacrosse coaches in order to create synergy prior to my speaking at the college lacrosse coaches convention.  I wanted to get the ebook to people efficiently, but I also did not want my book to end up like so many others and just be floating around, royalty free, online. I mean I’m not making much when I sell a copy, less than $2 on average, but sales cover my coffee purchases each month.  I can stroll guilt free into the gas station on the way to work and get that large black java I need hold the remorse.

Ultimately, I decided on using Twitter as my give away platform.  I have a fairly decent following there and I thought people might have an interest. Through the course of the day I posted four or five Tweets like this: 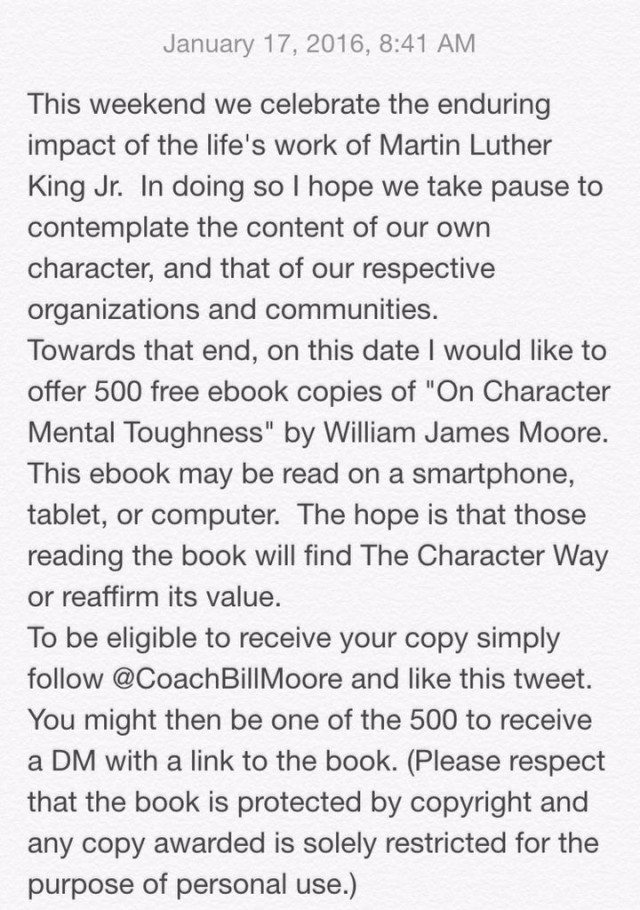 Throughout the day I heard from many followers.  As I began to send out links to the book most of the recipients thanked me.  Some wrote lengthier messages.  They shared how they had read my book and had shared the lessons they found in it with their colleagues, friends, players, students, or family.  It was nice to hear these stories and have these short conversations. Never discount how grateful an author is to learn that their book was enjoyed or had a bit of an impact.  It is always affirming to hear such things.

However, with about two hours to go on give away day, I had only been able to give away 94 books, far short of my intended 500.  I never anticipated that I would fall so short of my goal.  This book I wrote to help people discover the power of positive character, to take this huge concept of character and present it in a form that is simple and progresses in a logical fashion, etc.  Maybe the two pretty big football games or the siren call of the narcissists we also refer to as politicians debating had distracted people from finding out about this chance to score a free book.

I took one last chance and sent out another Tweet.  To be an author is to accept the humility of rejection and yet attempt to persevere nonetheless.  This final push led to a flurry of responses and allowed me to double the amount of books given away for the day.

My hope is that these little pebbles of ebooks will have a ripple effect.  I really do believe I am on to something; a perspective that creates a universally accessible and acceptable rising tide which will lift us from our individual and collective troubles and help us all to make better decisions and reach our potential. I have had people I respect recognize this. I am glad I tried.  I hope to hear stories of how this give away changed outcomes for the better someday.

Once midnight hit, I shut down Twitter for the night and fell alseep reading my book.  I hope more than a few others stayed up later then intended as they read their new copies.